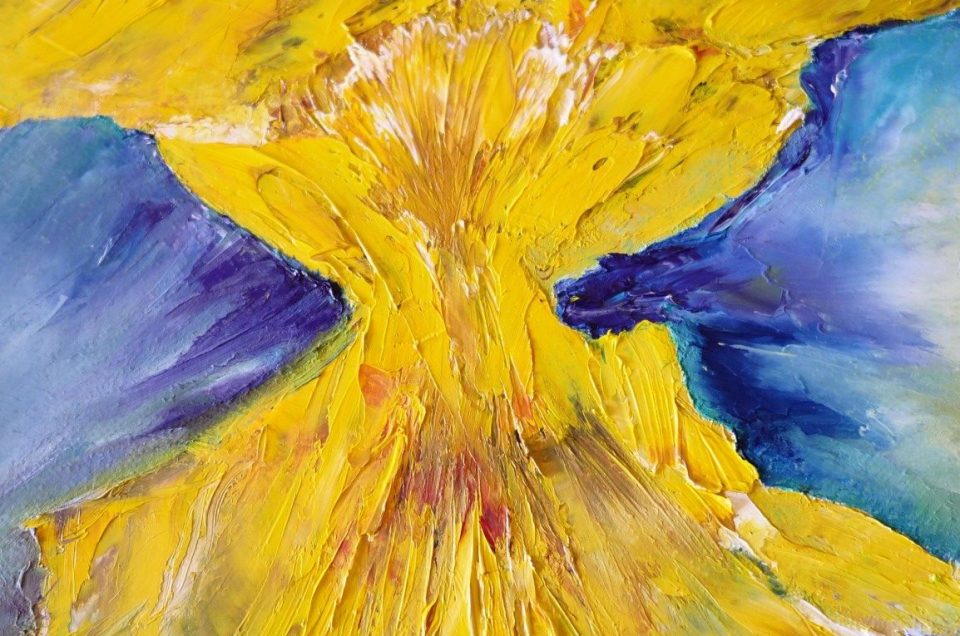 I chose to paint the species because of it’s similarities to so many other flowers  the first two that comes to mind being that of the orchard and even the Hibiscus like petals.Yet neither of those two would be abled to withstand the heat of the desert and the heat of the sand in the middle of summer. Proboscidea althaeifolia is a species of flowering  plant  known by the common names desert unicorn-plant and yellow-flowered devil’s claw. It is native to the desert southwest of the United States, where it grows in sandy habitat and blooms during the hot summer. This is a perennial herb growing from a thick, tuberlike yellow root. The stem is decumbent, creeping along the ground. The shiny leaves have rounded, oval, or roughly triangular blades up to 7 centimeters long which are deeply lobed and wavy along the edges. The inflorescence is an array of many showy, fragrant, bell-shaped flowers with five lobes flaring several centimeters wide. The flower is yellow to orange or apricot with an intricate pattern of speckles and streaks, its lower lobe lined with a nectar guide. The fruit is a large seed pod many centimeters long, a cylindrical body tapering into a very long, thin, curving tail. As the fruit dries the tail cracks open and splits into two hooked, claw-like halves. These hard, dry fruits were used as tools by local Native Americans

To quote the Arizona-Sonora Desert Museum: “The variety hohokamiana is a cultivar developed by the O’odham. It differs from the wild type in two important ways. The cultivar has claws up to a foot (30 cm) long with softer fibers. The black fibers in the claws are used in basket-making, especially by the Tohono O’odham. The longer, softer fiber in the domesticated claws are easier to work with. Secondly, the seeds of the cultivar are white instead of black, and lack germination inhibitors. While seeds of the wild type must lie in the ground for a couple of years before they will germinate, the white seeds sprout as soon as they get wet in hot weather and are thus easier to cultivate. This is one of the few plants domesticated north of Mexico, and this seems to have been accomplished only late in the last century. There is a theory that the introduction of cattle was the catalyst. Cattle will eat devil’s claw plants, and O’odham women may have been forced to save seeds and grow them in more protected areas than previously. Among the saved seeds was a variant with longer claws and white seeds. The cultivar is now grown by more than 25 native cultures, some of whom live far beyond the natural range of the wild devil’s claw.”

At first glance one would never believe how tough the flower really is.