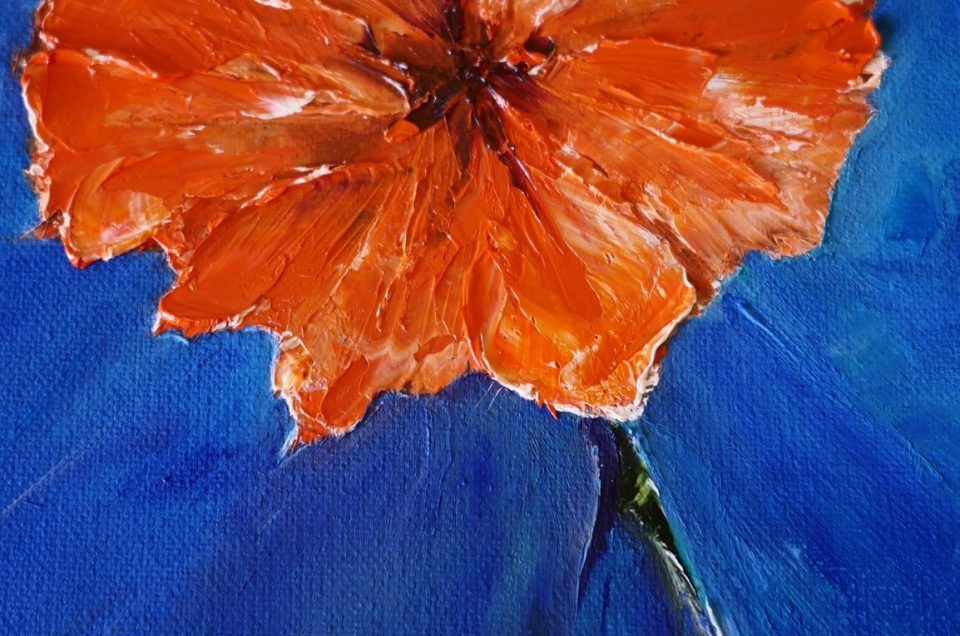 I decided to paint this striking flower simply to clear things up. The “dirty little secret” is that despite its common name, the Arizona Poppy is not actually a poppy. It’s not even in the poppy family Papaveraceae. The California Poppy and Prickly Poppy are in the poppy family.

Five-petaled, three-quarter to one and one-half-inch wide flowers rise above the plant. Generally bright orange with a red basal spot, they can also be white with a red basal spot or even yellowish with a dark orange spot. Petals have numerous nectar guides and are strongly ultraviolet reflective. Flowers only remain open for a single day, and they are cross-fertilizing for most of the day but become self-fertilizing as the flowers close.

Kallstroemia is a genus of flowering plants in the Caltrop family, Zygophyllaceae. The approximately 17 species it contains are native to tropical and warm temperate regions of the Americas. which includes the well-known creosote bush Larrea tridentata. The poppies are uncommon in the north, but quite abundant in the Southwest. Worldwide, there are 26 genera and 200 species, including 13 genera in North America.

It is found throughout the Sonoran and Chihuahuan deserts. South into Mexico but not Baja California. Also at the southern tip of California. Lieutenant William Hemsley Emory of the Corps of Topographical Engineers first obtained a specimen of Arizona Poppy on October 28, 1846, near Safford, Arizona on the Gila River. The type from along the Gila River Arizona, the deep orange flowers of Kallstroemia grandiflora superficially resemble those the California Poppy Eschscholtzia Californica and thus the common name Arizona Poppy. (Also ,A. p. ssp.   Ambigua is endemic to Arizona.)

Even if Kallstroemia dominates an area one year, it may be rare or nonexistent the next. Common names such as “Arizona Poppy,” “Summer Poppy” and “Orange Caltrop” give some indication of this abundant annual plant’s lifestyle. Its orange flowers resemble the orange flowers of the Californian Poppy, and it blooms from July to October, in Arizona. Although the flowers lack any fragrance, over 40  species, including bees, wasps, flies and butterflies will pollenate it. Insects find the flowers and get directions to pollen and nectar from the ultraviolet reflecting patterns of the flowers. Areas that are not reflective appear dark and indicate either the location of the nectar or act as guides that point to the sugar source. The great variety of visitors utilize the flowers in four distinct ways. Unlike many insect visitors to plants, three groups do not play a role in pollination. One group avoids the anthers and stigma by being too small. A second group, including honeybees and larger wasps, extract nectar from under the flower. A third clan only stops by for nectar. A fourth group gathers pollen and nectar from within the flower and contributes to both cross- and self-pollination.

The  Spanish name, “mal de ojos” or , sore eyes could have something to do with all this pollination. You think?