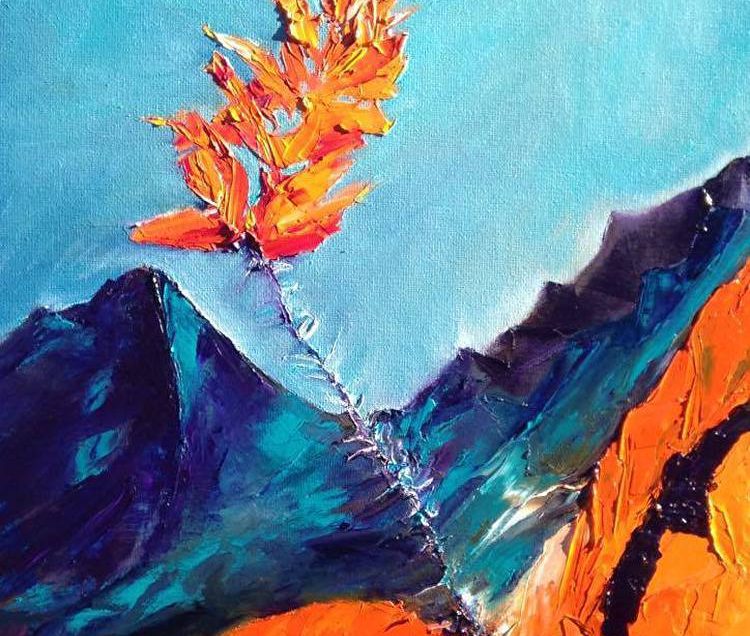 The landscape surrounding Tucson is filled with many different flowers at various times of the year. What caught my eye twenty five years ago on arrival in Tucson was how Saguaros and Ocotillo had dominated the vistas with their height, but this rugged looking plant in particular stood out in it’s dynamic response to rainfall in an instant. On Horseback one notices things from a different angle and once again my Horticultural background helped me notice how sensitive it was to these changes in weather and how it responded to survive, like leaves that flourish as soon as 48 hours after a rain period.

The Ocotillo as we know it means “little torch” in Spanish. Ocotillos produce clusters of bright red flowers indeterminately at their mature stem tips, which explain the plant’s name. These bright crimson flowers appear especially after rainfall in spring, summer, and occasionally fall. Individual flowers are mildly zygomorphic (The flowers are always more or less bilaterally symmetrical.)  Plants bloom once in the spring from March through June depending on latitude then sporadically in response to rainfall during the summer. In southern Arizona, blooming coincides with the northern migrating  hummingbirds from Mexico,  toward western mountain ranges .These Hummingbirds and native carpenter bees are responsible for the flowers pollination.

Ocotillo is not a true cactus. For much of the year, the plant appears to be an arrangement of large spiny dead sticks, although closer examination reveals that the stems are partly green. With rainfall, the plant quickly becomes lush with small (2–4 cm), ovate leaves, which may remain for weeks or even months Fouquieria splendens, Ocotillo ,coachwhip, candlewood, slimwood, desert coral, Jacob’s staff, Jacob cactus, and vine cactus  is a plant indigenous to the Sonoran Desert and Chihuahuan Desert in the Southwestern United States southern California, southern Nevada, Arizona, New Mexico, western Texas and northern Mexico as far south as Hidalgo and Guerrero.

One distinctive trait of the Ocotillo is the woody spins that cover the length of the stems. These spines begin as. These leaves are responsible for the majority of the plants photosynthesis. As the season becomes arid, the leaves senesce and leave behind the petiole. The petiole then begins to harden and becomes the thorns that aid the plant in protection from predators. Once the leaves have all fallen off, the waxy stems now perform the synthesis of sugars needed underneath the bark . During periods of drought, these curious plants shed their leaves to reduce evaporative loss and conserve plant moisture. Individual stems may reach a diameter of 5 cm at the base, and the plant may grow to a height of 10 m (33 ft).This desert giant also produces tannins in its defense .

There are no known desert creatures that rely on Ocotillo for their primary food source. However, caterpillars, ants, and ground squirrels eat the flowers.The seedlings of the Ocotillo drop between May and mid-June and are dispersed by means of the wind. Seed viability is 90% but decreases to 40% due to moisture stress. Flowers of the Ocotillo, which harness the seeds; remain in bloom for 50-60 days.

The Apache Indians often used the reddish orange blossom, fresh or dried in a tea, which aided in the relief of soar and swollen muscles.Once again this desert is a prolific bearer of plants and flowers that never ceases to amaze me.