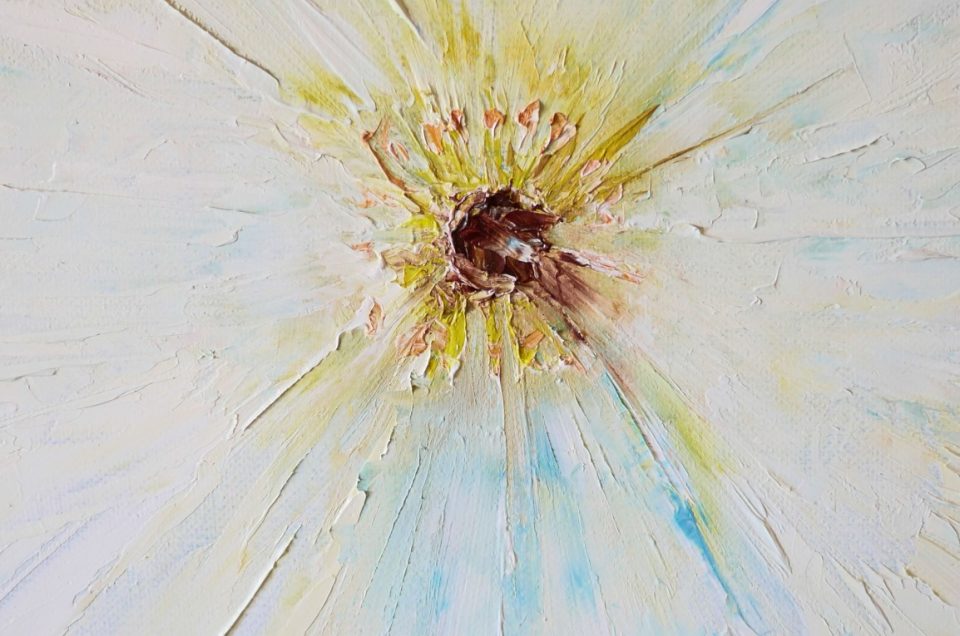 I chose to paint a member of the Poppy family for a variety of reasons. Firstly they are pretty! However, would you believe that the British smuggled Opium in exchange for tea? Yup! Go figure they were addicted to tea not opium. The narcotic opium is an alkaloid found in the species Papaver Somniferum, however there is so much history attached to the poppy family going back to 3400 B.C. On the silk road Sumerians soon passed it on to the Assyrians, who in turn passed it on to the Egyptians. Then during the opium wars in 1839, Britain through the East India Company smuggled opium to the Chinese in return for tea.  The great impressionists Degas, Mary Cassat, Monet, and Renoir amongst others. All painted fields of the Red Poppy of Flanders, species Papaver Rhoeas although this poppy is notable as an agricultural weed hence the common names including “corn” and “field.”  It is an annual herbaceous species of flowering plant in the poppy family, Papaveraceae. Common names include Common Poppy, Corn Poppy, Corn Rose, Field Poppy and Flanders Poppy.

“In Flanders Fields “, is a war poem written during the First World War by Canadian physician Lieutenant-Colonel John McCrae, who also previously fought with a volunteer force in the Second Boer War. He was inspired to write it on May 3, 1915, after presiding over the funeral of friend and fellow soldier Alexis Helmer, who died in the Second Battle of Ypres. According to legend, fellow soldiers retrieved the poem after McCrae, initially dissatisfied with his work, discarded it. Notable to him was the fact that these red poppies grew on graves and disturbed soil in fields.

In Flanders fields the poppies blow

Between the crosses, row on row,

That mark our place: and in the sky

Scarce heard amid the guns below.

We are the dead: Short days ago,

Loved and were loved: and now we lie

Take up our quarrel with the foe

To you, from failing hands, we throw

The torch: be yours to hold it high

If ye break faith with us who die,

We shall not sleep, though poppies grow

The poem and poppy are prominent Remembrance Day symbols throughout the Commonwealth of Nations, particularly in Canada, where “In Flanders Fields” is one of the nation’s best-known literary works. The poem also has wide exposure in the United States, where it is associated with Memorial Day.

Here then is my impression of the rare Species Argemone Arizonica. It has a delicate flower resting on really angry leaves and similar to the widespread Argemone Pleiacantha known by the common name Southwestern Poppy . It too, is native to Arizona and New Mexico in the United States and Chihuahua and Sonora in Mexico. Argemone Arizonica is not only a Grand Canyon endemic, it is endemic to the area of the North Kaibab Trail and the Bright Angel Trail. This is rare! Amongst other species the flower has white paper like petals. A thistle-like perennial herb, with stems densely covered with spines having one to several, often multiple and sprawling leaves which are sessile. In botany, sessility means “sitting”, used in the sense of “resting on the surface,” is a characteristic of plant parts which have no stalk with distinctive blue-green cast, deeply and distantly lobed to near the midrib, tipped by an indurated prickle.

In the spring, fields in the southwest are filled with Californian Poppies, or Golden Poppies, species Eschscholzia Californica. While poppies are uncommon in the northern states, they are quite abundant in the Southwest. Worldwide, there are 26 genera and 200 species, including 13 genera in North America.